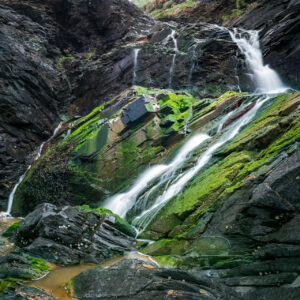 The popular magazine Digital Camera World recently ran an article on waterfall photography, suggesting photographers should throw light-sticks into the water in order to create colourful light-trail long exposures. I’m all for creativity in outdoors photography, but DCW’s article spoke to a deep problem with the way the author thought about nature and photography. After widespread anger on social media and beyond, the magazine withdrew the feature and replaced it with a pretty decent guide to shooting long exposures. I wrote this blog post before the original piece was pulled, and leave it here as an expression of my views on ‘enhancing’ landscapes.

To recap: the article encouraged people to find an out-of-the-way waterfall (it used a site in the Brecon Beacons), go there at night, stand in the pool with a mate, throw light-sticks off the top of the waterfall and then gather them up from the pool at the end of the shoot.

The conceptual aspect is less dangerous, but somehow more irritating:

The issue, of course, is that here [sic] are countless amazing waterfall photos out there already. However, this technique gives you an unusual twist to liven up your waterfall shots by enhancing their magical feel.

We’ve taken another staple of long exposure photography – that being light trails – to add an additional element to what would otherwise be a fine but forgettable waterfall image.

Waterfalls are beautiful and attractive photographic subjects, and it’s true to say that there is a large selection of waterfall photography ‘out there’ already (guilty, as charged). Some waterfalls – notably in Iceland – have become so popular, they’re practically dammed with photographers trying to make the most of the spectacle.

It’s surely quite a leap to suggest any one of these pictures is inherently forgettable. To suggest waterfall photography is ‘forgettable’ is to assume none of us really care about what we’re shooting – that we’re just clicking the shutter button to make a disposable bauble. This isn’t fair to outdoor photographers who care about their work – least of all DCW’s readers, many of whom will be working or aspiring professionals who love what they do and put real effort into it.

There’s a deep problem here, too, with the notion that the photographer’s job is somehow to improve upon nature. In the writer’s mind, the waterfall just isn’t enough – you have to ‘enhance its magical feel’ by introducing a tawdry gimmick. But here’s an idea: forget about gimmicks and work with what you have. Nature gives you all the creative options you need, without asking you to deliberately litter beautiful places.

Please, just don’t throw glowing rubbish into deep water in the dead of night and then wade out to retrieve it. As Digital Camera World’s own pictures indicate, the rubbish and risk really aren’t worth the rather horrible results.