Posted at 19:00h in Photography by Andy Wasley 0 Comments 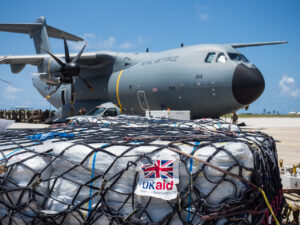 Last year I had the great privilege of supporting humanitarian operations in the Caribbean following Hurricane Irma. I was there as the Royal Air Force’s deployed head of strategic communications, a role that involved a lot of hard work liaising with UK and international media and, from time to time, escorting journalists through some of the worst-hit areas. I was lucky enough to be working with a truly superb RAF photographer, Jimmy – but I could also turn to my own skills to turn out news photography when the situation called for it. It’s a job I still think back on with huge pride – and one that still leaves me feeling more than a little shaken.

I wrote about my experiences late last year. Here, I’ve written about a few pictures that bring back especially strong memories. 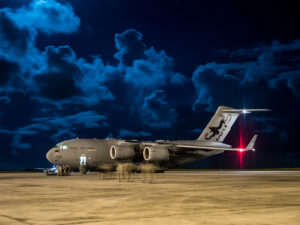 We arrived in Barbados close to midnight on 8 September on a massive C-17 transport aircraft, along with the UK’s deployed headquarters. On arrival we found ourselves on a bare stand, waiting for transport to the Barbados Defence Force’s barracks at Paragon Lines, on the other side of the airport. It was a long wait: tonnes of aid shipments were already being moved around into temporary storage areas, but passengers were, for the moment, left to rest after a long flight.

Jimmy and I took the opportunity to make some early news photography of the frenetic activity at the airport. The conditions were spectacular: a full moon hovered high overhead, picking out scattered clouds with pale light in stark relief against a deep blue-black sky. Our lenses fogged almost immediately as the cold front elements hit the thickly humid air; a nightmare as I had chosen a slow shutter speed to create some motion blur. In every picture the result of that humidity is still visible, as the starbursts around the aircraft’s strobes.

The resulting images are, I think, far from perfect – but no matter: the Guardian seemed to like them – and to my eyes, they still speak of the urgency of that first night. 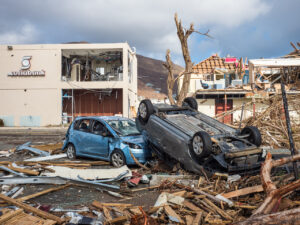 Wrecked vehicles and buildings in Roadtown, the capital of the British Virgin Islands, following Hurricane Irma.

Nothing really brought the crisis home for me until I visited Bridgetown for the first time. I was escorting a team of UK journalists on patrol with the Royal Marines. The Marines had quickly restored a sense of calm to people in the Overseas Territories, and we could feel the sense of relief whenever the Islanders saw that famous green beret.

Still, Bridgetown was a significant shock. The storm had left many buildings standing, but few in a safe condition. Here we saw a building missing a side wall; there, a shop front exploded into shattered glass and splintered wood. And everywhere, cars lay strewn like Matchbox toys.

We spent time surveying the ruins and talking to people busily trying to clear the debris. News photography is an important way to illustrate human tragedy, but here it felt scarcely able to hint at the depth of sadness and loss. 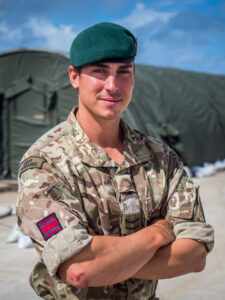 Towards the end of the operation I found myself spending more time at barracks. The frantic early stages of the task were over, and I was able to rely upon Jimmy to capture most of the news photography we needed to help get stories out to the local communities we served.

The final pictures I made were portraits of British commando engineers, for Soldier magazine. With no reflector or speedlite to hand I struggled to work in the strong sunlight – but sometimes you just have to make do.

These men spoke about their work to help rebuild schools in stricken towns. As young fathers themselves, they had been stunned by the damage to schools where children the same ages as their own should have been learning. Instead, the schools had reverted to building sites.

The British Army worked hard to get schools up and running. The Royal Marines helped restore confidence and order. The Royal Navy shipped tonnes of aid. And, every day, the Royal Air Force helped move people and cargo thousands of miles to support the effort. I wonder if I’ll ever be as proud of another job as I was then.