12 Nov 2019 Kentmere Horseshoe: back to basics in Lakeland

Posted at 16:05h in Photography, Travel by Andy Wasley 1 Comment 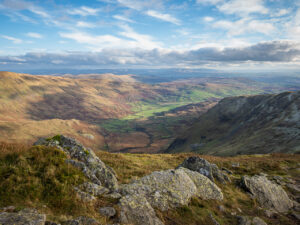 I must have checked the Mountain Weather Information Service a few times every day for a week. I was planning a weekend’s hike in the Lake District, around the spectacular Kentmere Horseshoe. In early November the Lakes carry an appreciable risk of winter conditions on higher land, and my route would keep me well above 700m for a good stretch of both days. Thankfully, MWIS promised an increasingly bright outlook for my Lakeland adventure, and my chance to get back to some basic hill skills.

Since my Cape Wrath Trail accident back in April, I’ve been trying to get my mind and body back in good shape for my next attempt. Part of that preparation involves practising key skills – navigation, re-routing, self-motivation and others – in similar conditions to those that brought me low. I’ve been hiking for a long time, but this doesn’t make me immune from skill-fade; recently I’ve found myself increasingly reliant on GPS gizmos, often leaving my map and compass in my rucksack and barely looking at them from day to day.

This weekend would be different: for the first time in ages, I stopped looking at my (excellent) Fenix 5x’s route map, and relied entirely on my trusty Ordnance Survey map and compass. It transformed the way I experienced the Kentmere Horseshoe, and reminded me that there’s fun to be had in getting back to basics.

Day one: Kentmere to Mosedale Cottage

My first day’s route took me from the superb Maggs Howe bunk house in Kentmere valley up the western ridge of the Kentmere Horseshoe, before turning east at Harter Fell to hike up to the spectacularly wild Shap Fells. Having left my route card in the bunk house, I set off under mostly leaden skies. The bare tops of Froswick and Ill Bell occasionally caught stray sunbeams and blazed orange in the early morning light; I reached Kentmere Pike and looked across the valley to those towering summits – the next day’s objectives – and drew my coat closer around me in rebuke to the increasingly piercing wind. Underfoot, squelching bog had yielded to crunchy, ice-coated mud and frozen puddles.

At Harter Fell the temperature had fallen further still and the ground stood rock-hard with ice. A few minute crumbs of snow drifted on the wind, pricking at my eyes – a reminder that the weather could turn quickly (not that this bothered the fell runners who dashed past from time to time). En route to the Shap Fells, I caught sight of Haweswater: a great, slate-grey slab of flat water at the base of Branstree. All being well I’d be looking down on Haweswater from Branstree by nightfall.

So far, so good for navigation. Quickly I’d found myself in familiar mental territory, relating contours and other features to what I could see on the map. I even stopped a couple of times to practise triangulation and resection. Sometimes I find that at a complicated track intersection my Fenix 5x isn’t quite quick enough to orientate me to the correct track; and often I’ll find myself traipsing along sheep tracks or other false trails for several meters before my watch reminds me I’m off-route. Here I fell back on my compass bearing, and didn’t put a foot wrong. It felt good to be getting back to core skills.

My next objective took me into quite different scenery from the peaks I’d been passing so far. The rolling boggy hills of the Shap Fells look deceiptively benign on the map, but they offer a stern challenge over sometimes awful terrain. Tarn Crag and Grey Crag loomed first. Even the freezing conditions couldn’t prevent the bogs there from saturating my boots. I squelched up to Tarn Crag’s lonely and faintly sinister old survey pillar. Distantly I could see grey clouds dissolving into shrouds of snow or rain on distant peaks.

Grey Crag had nothing more to offer – just black mud and bleak cairns, and an increasingly bitter wind. Soon the wind carried flurries of snow. As I strode on towards Harrop Pike the snow was falling thick and fast, and visibility was dropping quickly. I realised I couldn’t make it on to Selside Pike and Branstree. I took a bearing to Mosedale Cottage and made my way directly across the moor, startling deer en route – thankful for the wide view of the landscape I enjoyed on my map. As I reached Seavy Side, Mosedale Cottage snuck into view between veils of snowfall.

My last visit to the bothy had been exactly two years earlier, during military mountain skills training. Then, my group and I had the bothy to ourselves. This time, as I descended from Seavy Side, I saw two figures in the courtyard. With them, I saw the promise of company and, hopefully, a well-tended fireplace – the things that make bothy nights so special.

The figures turned out to be Mountain Bothies Association volunteers – builders from Shap, who had been working hard to keep this isolated spot in good nick. Since my last visit the bothy had smartened up considerably: a new sleeping platform in the back room where I’d shivered on the floorboards last time; extensive roof repairs; and the door to the composting toilet (and its staggeringly large mound of human waste) had been sealed shut. It’s a truly grade-A bothy – and even better once a roaring fire drives out the penetrating chill of cold stone.

Three students staggered in just after dark, enjoying their own mountain adventure and only their second bothy night. We spent the evening, in classic bothy style, sharing drinks and swapping tales. It’s an experience entirely unlike any other – and we owe it to the MBA’s volunteers that we’re able to enjoy this part of mountain life.

I set off at 8.00 the following morning, under crisp and clear blue skies. Overnight there’d been a fresh sprinkling of snow, and the hills had been dulled to ash-grey by the powder. I headed back towards Harter Fell, avoiding the drop and climb around Brownhowe Bottom by following the 500m contour south-east of Gatescarth Pass; en route I passed a couple of long-forgotten quarry buildings, skeletal remains gazing blankly towards Sleddale. These aren’t marked on the map and they’re invisible from the track – I wondered how many people had passed by there before me.

From Harter Fell I pushed on up to High Street, and then on to Thornthwaite Crag. The fells were fairly busy – unsurprising, given the glorious weather – and I was seldom far from other walkers as made my way to the western ridge of the Kentmere Horseshoe. I hauled myself up Froswick and the forbidding grey bulk of Ill Bell in streaming sunshine; just as the weather could turn cold quickly, now I found myself growing uncomfortably warm, and grateful for the chance to lose my shell layer. Beyond Yoke I decided to complete a day’s Wainwright-bagging with squelchy treks to Sour Howes and Sallows, although – in the gathering gloom of early evening – I rather wish I hadn’t.

Still, this was a classic Lakeland weekend, taking in the popular Kentmere Horseshoe and breaking it up with a trip out to some of the area’s wilder scenery. It’s a marvellous region of the Lake District, and a great spot for honing the core map-and-compass skills that will help keep me on track in Scotland next year.

Route maps: You can see my planned routes on Ordnance Survey: Day 1, Kentmere to Mosedale Cottage; and Day 2, Mosedale Cottage to Kentmere. Note that I didn’t make it to Selside Pike and Branstree because of the snowfall.

Common sense… Please do not venture into the mountains in winter without sufficient equipment and experience to deal with adverse weather – including a whistle, headtorch, spare batteries and emergency shelter – and make sure you allow for increasingly short daylight hours. It’s good practice to leave a route card and anticipated return time with someone before you set off.