Posted at 07:00h in Travel by Andy Wasley 0 Comments 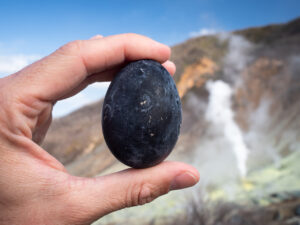 An Owakudani egg – boiled in geothermal hot spings on the side of Mount Hakone, an active volcano in Hakone, Japan. The water turns the eggshell jet black.

Who’d ever have imagined they might find themselves eating eggs boiled in a volcano? That’s just what I found myself doing on top of a volcano in Japan during a recent travel photography assignment. Mount Hakone stands high above a spectacular geopark and scenic lake, all within striking distance of Tokyo. It’s an area of typically grand Japanese beauty.

I’ll come back to those. I visited Hakone towards the end of a three-week tour of Japan, and found myself in the fantastic surroundings of the Ashinoko Hanaori hotel. Most of my travels are spent in cheap hotels or hostels, so that I can save money for travel and food. This was a rare luxury: a smart place with an excellent sake bar, overlooking the flat blue expanse of Lake Ashi. Along with the sublime Hotel Iyaonsen in the Iya Valley, it added much-needed luxury to a long trip.

On clear days, it’s possible to see Mount Fuji from the Lake. Sadly, Fuji-san remained stoically hidden behind clouds for my whole visit. (I didn’t actually see it at all until flying past it on my way back to the UK – that’s still quite a view.) Still, the lake and its surroundings are beautiful and worth exploring.

Tourists stand in line for selfies at the famous red lakeside torii (gate) at at the Hakone Shrine, Lake Ashi, Hakone, Japan.

Ashinoka Hanaori sits at the northern end of the Lake, close to a port that offers trips south on fairly horrible pirate-themed ships. One such ship deposited me close to the Hakone Shrine, famous for its red torii gate looking out over the lake. Believe me, if you’ve seen pictures from Japan, you’ve seen that torii, usually in a long-exposure photograph. Sadly, this iconic image has turned the shrine into something of a theme park: a melée of selfie-stick wielding crowds, who form an orderly (if noisy) queue hundreds of metres long to take one selfie at the torii. I’d far rather spend time in some of Kyoto’s quieter temples than this shrine to social media.

I found better attractions north of the lake. Ashinoko Hanaori sits next to a cable car terminal that tracks north-east, across the flanks of Mount Hakone – an active volcano, and home to those volcanically boiled eggs – then east to Gora. In Gora I paid a visit to the Hakone Museum of Photography, a small studio and gallery owned by the Japanese photographer Katsura Endo. The Museum carries many samples of Endo’s beautiful analogue work. He has made Mount Fuji his muse – and his gallery would turn out to be the only place where I could see the landmark (albeit in print). Endo and I chatted for some time about working as photographers in our respective countries, and about my travel assignment; he left me with the gift of a signed copy of his photobook.

I visited Hakone Volcano itself on the way back to the hotel. Like much of Japan, Hakone is incredibly geologically active, and the mountain doubles as a sulphur mine: next to the excellent Geological Museum, the open-cast sulphur mine emits billowing clouds of eggy-smelling steam (you get used to it) and forms an otherworldly backdrop for the cable car.

Areas like this help fuel Japan’s famous hot spring baths, or onsen. The same heavily mineralised water that is distributed to onsen is used at the Geopark to boil those owakudani eggs – something of a tourist stable for anyone visiting the mountain. For reasons that aren’t quite clear, the water turns the eggshell jet black: they end up looking like something Faberge would be proud of.

As for the taste? Plain old boiled egg. Quite nice with salt. Don’t blame me for leaving this surprisingly unsurprising fact to the end – there’s much more to see in Hakone than black eggs, and better things to eat too.